Before going to HK people around me told me that the Hong Kong people were rude, notwelcoming people, that they don't like foreigners, especially us, the long nose and red face.
I also heard that when you enter a shop just to look at the stuff, they will send you out telling you, "if you can't afford to buy, then don't come in".
That is to say I was prevented against Hongkongites, but I just didn't care because I was there to see my friends and the city, If they don't like me, never mind. 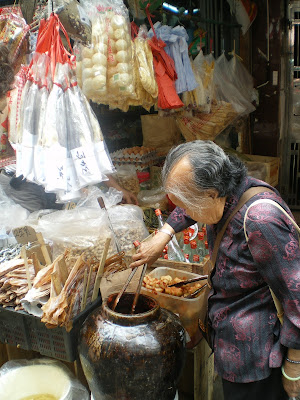 In the photo above, I don't know what she is fishing out of this big jar.
Anyway, I you can know expect, they happened to be just the opposite, they are deliciously nice and welcoming people. 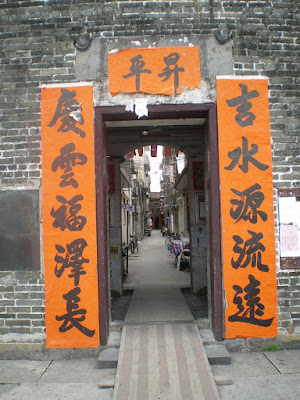 Always ready to help you in the street, in the subway, anywhere you seem lost, or looking for something, in every shop I went, they were always helpfull, smiling, ready to give you a hand. 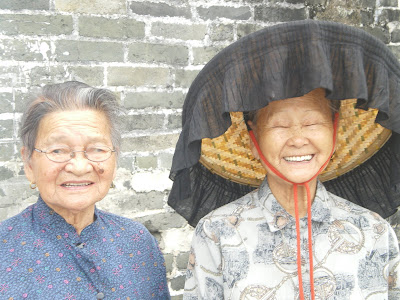 In the New Territories, these two Hakka women live in a strange village, first built in the 12th century, square, with very narrow alleys, small but confortable house. 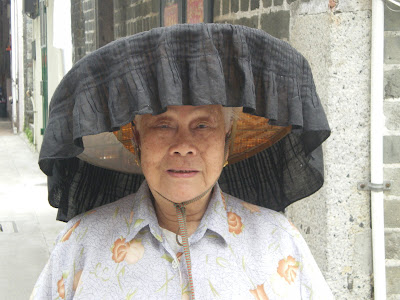 Of course, tourist are coming to visit the village, and I guess they don't have much to live on, so they try to make a living out of the photographers.

This sweet lady asked me to take a picture of her, I agreed happily, then she asked for money, I gave her some coins. Gosh, it was not enough, my friend Martine didn't have the 10 HK$ she was asking, me neither, Mr Garden was away in a temple, she got angry, cursed me, shout at me, followed me in the village, making people to go out of their house, and she was telling them, in her Hakka language that I was the most ugly-stingy red long nose she has ever seen in her life. In her case Hakka language was easy to understand! 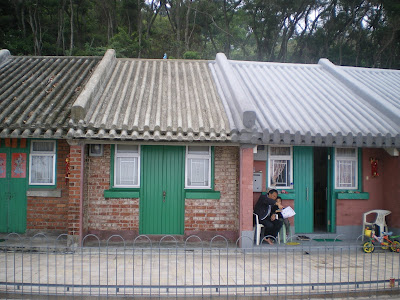 In the beach at Stanley market, in the South of HK Island, some fishermen houses.

But Stanley market is also where you need money to buy, buy till you drop.

That is awful that you were treated so poorly.

Your story reminds me of the markets in Mexico where folks pull shame and guilt trips on foriegners who don't know about these tourist scam shenanigans.

by Danie a dit…

Hammer, I am happy to see you back, you know, I didn't mind her cursing me, it was fun the way she was acting, I enjoyed it, and people around in the village didn't care either, she was the one making fool of herself.

hi dany, great to meet you, so wonderful today. shame on that hakka lady (i'm a hakka too)behaving like that!! your earlier pic on that big clay pot, normally they always keep pickled food/vegetables there, salted eggs etc. You have a safe trip back to france and i cant wait to see all pictures. merci :)

That sounds so wonderful that you got to see what its like. You know Helene put up a new post and she travels alot and she made a point of them. I love hearing about your travels and hers because right now I have no idea when we will be able to travel. I love seeing new places through both of you.

It was awful that the woman treated you like she did but how were you suppose to know what she wanted exactly and how much.

That is funny - asking you to take the picture then complaining you didn't give her enough for it. Bold!

Hahaha, Kitem, that was true when I first visited HK in 1983. Dont you dare touch their goods, you will get scolded. But after several trips there(the last one in 2002), their services have changed. They are friendly and smiling. I think many service people have to learn from HK people about how to handle customers. Just enter any shops, they will greet you before you enter, it make you feel great shopping there and if you leave the shop empty handed, they will wish you have a good day. Nice photo of the local scenes. Thanks for sharing.

Dont worry about the Hakka Lady, most on HongKong Island are not like that. Have a pleasant trip.